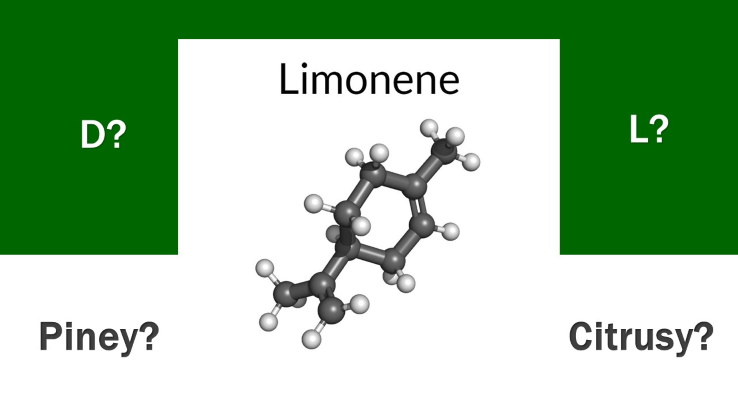 If you think that limonene tastes and smells of citrus, you’re at least half wrong. That’s because there are two distinct variations of this monocyclic monoterpene, each with its own flavor and scent profile, one of which is NOT citrusy. This article explains the different variations of limonene, a Top 5 terpene in cannabis.

There are two types of the monoterpene called limonene:

The limonene molecules are essentially the same, but there are different mirror versions of this terpene molecule that are called isomers. An isomer refers to compounds that have the same molecular composition, but with different arrangements of the individual atoms within the molecule. In limonene, each version of the molecule has the same number of carbon and hydrogen atoms, but arranged differently. To be even more specific, d-limonene is the dextrorotary isomer, which rotates the plane of polarized light positively, while l-limonene is the levorotary isomer, which rotates the plane of polarized light negatively.

Typically occurring in many cannabis strains or cultivars within the Top 5 terpenes by concentration, it is d-limonene – derived mostly from byproducts of the orange industry – that smells and tastes of citrus fruit. L-limonene, on the other hand – which may also be present in cannabis – smells and tastes of pine needles.

To muddle matters more, there is a third version of limonene. This version features both l-limonene and d-limonene in equal parts. Isomers such as these are referred to as racemic. Each of these three versions are notated differently, based on their optical rotation:

Unfortunately, limonene is known in the scientific community by many different names, most confusingly as S-limonene – which is the same as L-limonene, and R-limonene, which is the same as D-limonene. But regardless of the numerous monikers of these compounds, officially, it’s the d-limonene molecule that is citrusy, and the l-limonene version that is piney. If you work in the cannabis industry or you send cannabis for laboratory testing of terpenes, ensure that the laboratory you work with is able to differentiate between the two types of limonene.