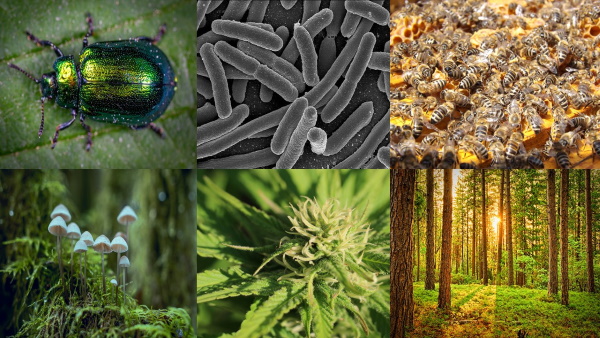 Move over, English; Terpenes are by far the world’s biggest communication medium.  Used by plants, insects, fungi, and bacteria to communicate and interact with the world, terpenes are a type of language that can be easily understood across species and kingdoms.  In fact, if you were to lump all the man-made languages of earth together, the language of terpenes would still dwarf this collection.  The following article is an excerpt from The Big Book of Terps, by Russ Hudson

Chemical signaling is how much of life on Earth communicates, and the medium of majority is terpenes[1].  This type of communication occurs between plants, insects, birds, fungi, bacteria, and some invertebrates. Terpene communication appears to be easily understood regardless of which entity is speaking it and which is “receiving” it.

For instance, when bark beetles attack conifer trees, a war occurs that is mostly based upon terpenes, as the tree attempts to amass enough volatile terpenes to repel or kill the invaders. Meanwhile, the beetles use these chemical signals to adjust their behavior, including cooperative behavior between beetles that can sometimes outpace the tree’s ability to produce enough insecticidal terpenes[2] to defeat the insects.  Both entities, regardless of the animosity and deadly intent between them, speak the same language.

Because of their sheer numbers, most of the world’s communication in terpenes occurs between microorganisms.  Recent research has demonstrated that bacteria and fungi communicate with each other in the language of terpenes[3], and it is already well understood that trees and other plants communicate with fungi and bacteria through the soil.  Comparatively speaking, it is the languages of man that are odd and rare.

However, it’s logical that this chemical communication extends to humans and plants – especially cannabis.  Consider that when you smell a particular variety of cannabis that you enjoy, you are receiving communication from the plant in the medium of terpenes.  This is more than just an arbitrary smell, however – it tells us something about the plant, and it makes us feel a certain way, although it’s often not easy to articulate precisely how.  When looked at in this light, and with more research and study, it will become clear that humans can indeed receive the communication of plants – including cannabis – through the language of terpenes.

The question that remains is, can we do more than just receive this communication?

4 Replies to “Terpenes: The Most-Spoken Language in the World”