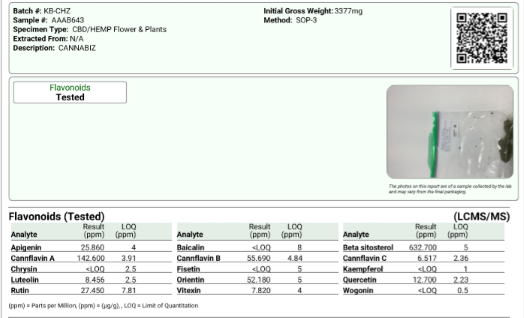 Standard bias exists at most cannabis testing laboratories, potentially skewing our knowledge of the terpene and flavonoid profiles of various cannabis strains.  Although it will be obvious in hindsight when explained, most people in the cannabis industry don’t consider laboratory standard bias when they send in samples for testing.  This is important information, so if you’re not familiar with standard bias, it works like this:

Laboratories purchase sophisticated, expensive equipment like Gas Chromatographs and Mass Spectrometers to detect compounds found in cannabis products.  When these machines arrive, they are like infants; they do not “know” any terpenes or flavonoids (or any other compounds).  Instead, the machines must be taught to “recognize” compounds.  This is done by introducing a standard to the machine.

For instance, a brand-new gas chromatograph (GC) has no prior “knowledge” of limonene; a laboratory-grade standard of pure limonene must be purchased and introduced to the machine by research technicians.  Later, when the machine detects certain signals that match the signals it has learned to be output by limonene, it can make a comparison and relative identification.

So What’s the Problem?

Because most laboratories only test for what the lab considers to be the top ten terpenes in cannabis, a great deal of information is missing for many people who test their cannabis for terpenes.  For instance, if you’ve grown a strain that’s high in geraniol, but the laboratory you sent your sample to hasn’t taught its GC machine what that compound looks like, then there won’t be any listing of geraniol in your cannabis test results and COA.

A laboratory can only return results for compounds that they have setup standards for.  Because there are around 40 terpenes that regularly appear in cannabis, there is a significant amount of misinformation being spread because of laboratory standard bias.

As another example, in a review of hundreds of cannabis terpene lab tests, this author found one occurrence of a strain called Blue Dragon, where the #1 terpene in the strain (by concentration) was beta-farnesene.  Interestingly, most laboratories do not test for this terpene (meaning they do not have standards setup for it), so if the provider of the sample had sent this same batch to a different laboratory, the test results would be completely skewed, showing a different compound as the #1 terpene in the strain.

Other tests showed p-isopropyltoluene in several different cannabis strains, but only in tests conducted by just one out of dozens of laboratories.  In fact, p-isopropyltoluene isn’t normally thought to exist in cannabis.  With the lab in question, however, this compound was reported as a major constituent in several unrelated strains.  This is a sort of reverse standard bias.

These issues also apply to flavonoids, and with new flavonoids discovered in the last few years, the problem is growing.

Standard bias can also cause lab test results to report erroneous information, instead of simply not reporting data.  For instance, this author sent 15 samples of unique cannabis strains for flavonoid testing to ACS Laboratory in Florida.  Like many cannabis-related websites, ACS wrongly considered Beta-Sitosterol a flavonoid, and included it in the lab’s flavonoid panel.  14 of the 15 test results returned to me showed this compound as the #1 flavonoid by concentration, but here’s the problem; beta-sitosterol isn’t a flavonoid at all.

Fortunately, there is an easy solution to this problem; laboratories must be compelled to purchase and calibrate more terpene and flavonoid standards.  Most standards are relatively inexpensive, and the process to “teach” a GC or MS machine is simple and fast.  If a laboratory you’re working with doesn’t test for specific terpenes or flavonoids that you suspect might be in your cannabis strains, call the lab and ask them to get the proper standards; a professional lab with which you have a good business relationship will happily oblige.