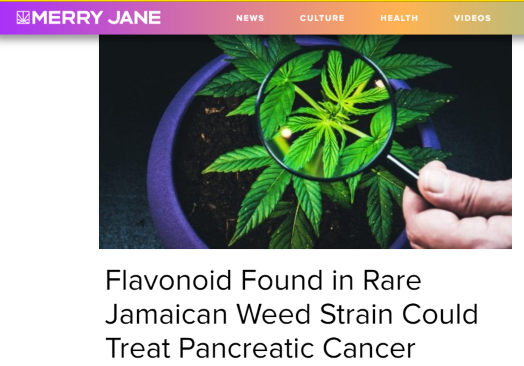 Recently, an article in Merry Jane titled “Flavonoid Found in Rare Jamaican Weed Strain Could Treat Pancreatic Cancer” was shared worldwide.  Unfortunately, although the information in this piece is misleading, it has been disseminated and swallowed without questioning by the cannabis and related industries.  In this article, Chris Moore writes for Merry Jane that;

“The federal government has granted approval to a new series of clinical trials that will evaluate whether a cannabis flavonoid derived from a rare Jamaican strain of weed can help fight pancreatic cancer.”

However, this is misleading, although most likely not deliberately so.  That’s because the cannabis flavonoid in question, Cannflavin B, was actually used by a company called Flavocure to make a synthetic derivative of natural cannflavin B called Caflanone.  The confusion here seems to be the lack of knowledge that cannflavin B occurs in many strains of cannabis, not just one “rare” Jamaican strain.  In fact, it’s likely that cannflavin B occurs in ALL strains of cannabis, and typically as one of the top 5 flavonoids in any variety.

Interestingly, Caflanone can be derived from cannflavin B as sourced from virtually any cannabis strain.  However, the Chairman of Flavocure, Henry Lowe, PhD, resides in Jamaica, and clearly has an affinity for the strain he is said to have discovered.  But the problem with this work isn’t just the fact that this compound is not unique to the strain in question, it’s also that two of the study’s authors work for Flavocure, which is a for-profit company.  These Flavocure employees include Ngeh Toyang, and Flavocure’s founder, Henry Lowe, who “provided the FBL-03G drug, contributed to study design, made input in manuscript including reviewing the manuscript[1].”   Further, the study was funded in part by Lowe’s company;

“Funding support for this work is acknowledged from the USA National Institutes of Health (NIH), grant number R21CA205094 and Flavocure Biotech Inc[1].”

This is a clear yet disclosed conflict of interest.

“Although the company is working to create a synthetic cannabis-derivative, the initial discovery of this cancer-fighting flavonoid came from a unique strain of Jamaican ganja.”

This passage is simply not true, as cannflavin B as isolated from cannabis sativa has been studied since the 1980’s[2], with microbial metabolism work done on the compound nearly a decade ago[3].  Despite the insinuations made in Merry Jane’s article, cannflavin B is nothing new to scientists.

Unfortunately, Moore’s article cites only one other Merry Jane article and one HealthEuropa article as its primary sources, with much of HealthEuropa’s sources coming from press releases or statements issued by Flavocure.  Sadly, with information about flavonoids in an emerging state, it’s no surprise that these bits of misinformation are so easily spread throughout the cannabis industry.  But let’s be clear; cannflavin B is extremely common in cannabis, and we’ve known about it for nearly 40 years.